Find the lowest prices for Spanish Language Courses in Granada!

Are you looking for Spanish language schools in Granada or a Spanish summer school in Granada? How about study Spanish in Granada or language courses for adults in Granada? Whatever type of Spanish course you are looking for, Languagebookings.com will help you find it—and at the lowest possible price! Browse over many Spanish schools in many locations in Granada until you fi... Learn more »
Best Price Guaranteed
Exceptional Support
Booking 100% confirmed

We help you choose your language course

Spanish courses for adults in Granada »

Spanish courses for adults and students of all ages and language levels who want to study Spanish in the summer or throughout the year.

Diplomas in Spanish as a Foreign Language (DELE)

Spanish Courses for Professionals in Granada

Speed up your career growth! Take a Spanish course for professionals in Granada and make your next career move faster. These Spanish langu...

Spanish courses plus activities in Granada

This is an original way to learn Spanish in Granada as these language courses are combined with fun and amusing activities. Here at LanguageBookings... 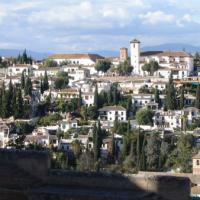 Escuela Montalbán
We have been teaching Spanish as a foreign language since 1986. Our Spanish school is located in Granada, Andalusia. The Spanish courses are held throughout the year. The friendly atmosphere and personal touch of our Spanish classes as well as Granada's Andalusian...

Courses from €141.00
8% discount
Instituto Mediterráneo Sol
Since 1992 Instituto Mediterraneo Sol (iNMSOL) has offered Spanish Courses in Spain throughout the year, in Granada, a city rich in history and with unique surrounding areas, which will make your stay more pleasant. Learn Spanish in Granada, in our Spanish school, ... 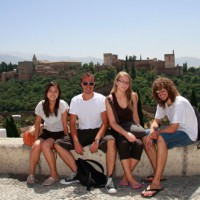 Enforex Granada
ENFOREX Granada is located in the lively, historical center of the city, right in the swing of things with restaurants and bars around every corner. The building itself is a typical andaluz -style house centered on an open patio. It's just a 3 minute walk from the... 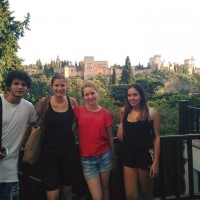 Find the lowest prices for Spanish Language Courses in Granada!

Learning Spanish through Spanish schools Granada can provide you with everything you need to learn about the language and the country itself. Granada is a province that is located at the foot of the Sierra Nevada Mountains. Granada sits on a vast area of fertile land which explains the abundance that the people are enjoying there. Food and culture is both rich here and when you decide to study Spanish in Spanish school Granada, you will experience more of the province’s exciting and enjoyable way of life.

Why Study at Spanish Schools Granada? 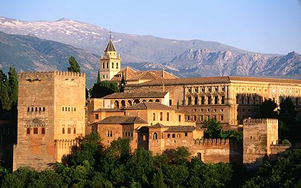 When most students flock to the country’s famous cities, studying at Spanish schools Granada will give you an exclusive experience of learning the language and seeing Spain in a different viewpoint. Staying in Granada will provide you with the opportunity to experience everything that this place is famous for. Also Spanish schools Granada are considered as competitive and as good as their counterparts in the city so you do not have to worry about the quality of education.

Granada is also home to the most attractive and picturesque churches and museums. This place is rich in their historical heritage which is shown in their architecture. While you are studying Spanish schools Granada, you can visit these places.


Alhambra is a great castle that is located in Granada. This is considered by travel enthusiasts as one of the Ten Wonders of the World. This castle is composed of beautiful gardens, mini palaces and forts. It has also been the place of Arab Sultans who took control over this province some time in history. Study in Spanish schools Granada and be one of the 8,500 people who witness the awesomeness of this place everyday.

A place where you can witness a Spanish woman dance the Flamenco live is in Sacramonte. The gypsies occupy this part of the province. The Rocio, which is a popular Flamenco gypsy cave, is also located here. As a student studying in one of Spanish schools Granada, you can go this place and buy a ticket for a Flamenco performance in one of the hotels where you will be fetched by a minibus.

Granada is one of the most visited places in Spain. This country has a lot more to offer than just a Spanish language course. Studying in Spanish schools Granada will not only teach you how to speak Spanish, it will also teach you how to appreciate and understand the country’s culture.

Get The Complete Guide for Study Travel Abroad!

Where to learn abroad?
Tips on how to find the best languages courses
How to make the most of your studies abroad?
And so much more!

All the necessary information in one place. Contains everything that you will ever need to get the most out of your language course and have the best experience abroad!

We hate span as much as you do, you can trust us, your email address will be safe with us!

Get advice and the best offers

Create your ad for FREE and get offers from our hosts
Post your ad
This site uses cookies. By continuing to browse the site you are agreeing to our use of cookies. Find out more here